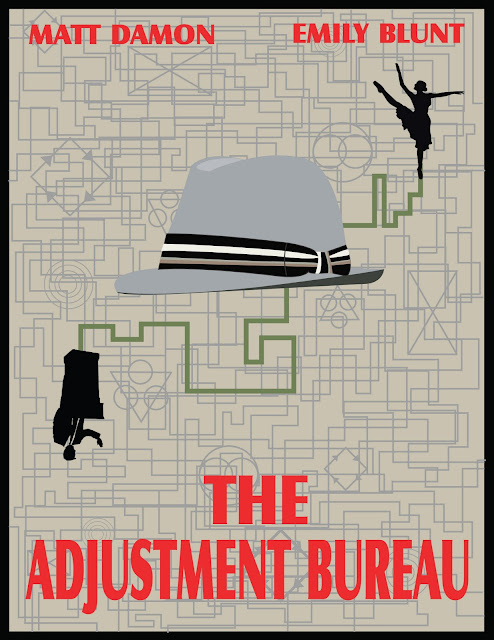 The Adjustment Bureau
Artwork and Review by: Daniel Albert
For years now the collective works of Philip K. Dick have been a treasure trove of source material for Hollywood.  With some films paying homage truthfully (Blade Runner, A Scanner Darkly,Total Recall, Minority Report)﻿ and others butchering source material like the Muppet’s Swedish Chef (Next, Paycheck),  you never know what you’re going to get going into a film based on the writings of one of the greatest sci-fi minds of all times.  Hell sci-fi in general is a genre that lends itself to all or nothing films leaving very little wiggle room for those who dare to take the plunge. 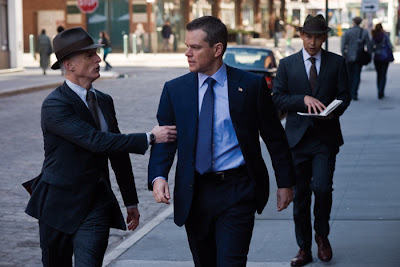 Which is why I was hesitant about The Adjustment Bureau.  Based on the short story by PKD The Adjustment Team, the film delves into some heavier themes (fate, free will etc.), albeit with a light, and at some times silly, approach.  Despite being hesitant however I was encouraged by the fact that the film was based on a short story and not a novel, as it leaves filmmakers more room to work with, usually having to add in content, rather than delete it.  This is not to say all novel adaptations are bad and all short story adaptations are good because, well, we’ve all seen results that counter that hypothesis.
What I found in The Adjustment Bureau was mos﻿tly good.  The movie is solidly acted by the two leads, Matt Damon and Emily Blunt, whose chemistry onscreen is so palpable you can’t help but root for them.  Visually the movie is stunning, especially in the chase scenes highlighting the sci-fi elements of the film.  Other than that the dialogue was snappy and fresh and explained some very conceptually tough subjects quite succinctly. 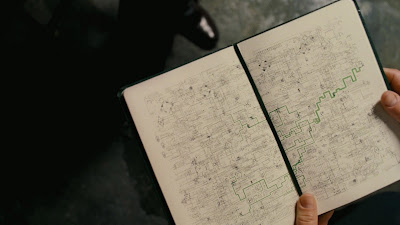 But as is the problem with many sci-fi films The Adjustment Bureau try’s to explain away non existant plotholes by inventing subtle nonsense about how its fictional world works.  Does it really matter that  the adjusters have trouble reading the decisions of the adjustees when they’re near water?  It comes into play later in the movie of course, but I found myself thinking, “They could have easily left that unexplained and it wouldn’t have changed the film at all”.  Same with the nonsensical “magic hats” the adjusters have to wear in order for them to use the special series of doors to move about the city rapidly.  If I’m gonna buy into the fact that there are people who can alter my fate magically do I really need to think that this hat is the key to their success? 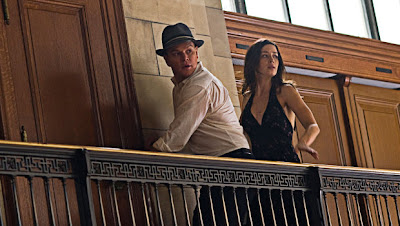 As I said before however the good in this film far outweighs the bad.  If you sit back and relax and give the film a bit of latitude when it comes to the fictional world the characters live in you’ll find one of the finest love stories made in the past decade﻿.  Not only that but you’ll find an enjoyable film that tackles some of man’s most complex ideas and comes out the back end with its dignity in tact (even if it is a little bruised and bloodied).
Those who go in looking for a hard thriller, as the trailers may have untruthfully alluded to, will surely be disappointed.  But go in, grain of salt in hand, and you will enjoy this film immensely.

Been There. Done That